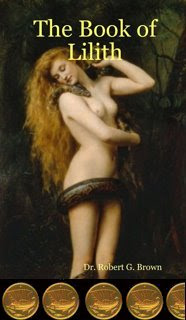 I've come to think that author Robert G. Brown might be one of those guys who really likes to hear himself talk. This isn't said with any malice, of course. He’s invested a good deal of his wild ideas and ruminations into this work. It is the product of an active, imaginative and thoughtful mind; taking an existing mythos and making it his own. I normally dislike this genre of book; mostly because they just come off as a blatant show of the author’s brilliance and wit; smug and lofty. But I couldn’t bring myself to hate the Book of Lilith. Trust me, I tried. The truth is, I kind of liked it. I kind of really liked it actually. ::sigh:: I know… The horror!

It’s the dawn of days… and God’s a-creatin’… Contrary to popular belief, God creates Lilith first. Lilith is vastly intelligent, but the moment she opens her eyes she is full of questions and confusion… and then God gives her Adam, a narrow-minded, prideful man, and things just get more impossible for Lilith. Their new home, the Paradise of Eden is a ticking time bomb—and then boom, ground zero—it goes up in a mushroom cloud. The effects of Lilith and Adam’s stormy relationship balloon outwards like a shock wave across the known world and the fallout washes over unsuspecting and unenlightened people.

It really is elegantly written on the most part. A couple of duplicated duplicated words are the only grammatical issues I happened upon. The style and voice is really quite excellent. Lately, I’ve had a hard time keeping focused on reading, yet this book had my attention whenever I had it in my hands. I kept reading it; I wanted to keep reading it, despite the fact that I don’t even like books about spirituality or etudes related to religion beliefs. This book was far from mind-numbing.

Problems? As a mean, I tend to have an issue with men writing in the voice of a woman. Mostly because men tend to write masculine traits into them; including the male sexual being. That irritates me, because there is pretty much always a failure to make it believable. You see, apparently, all it takes is a glance at a ‘well-formed’ turkey neck and wattle to get her motor revving—she doesn’t need anything else. Pardon my crudeness, but it's a thing I find very common in books where men create heroines... They are pretty much men when it comes to the libido. I also found that Lilith's emotional being is a bit stunted. She experiences various moments of deep introspection, and is faced with tragedy and horrors that would break anyone, yet Lilith’s emotional essence just isn’t there save for the occasional breakdown. It is the thing that bugged me the most about this book. Lilith behaved much of the time like a man. Even her motherly instincts were weak. It's possible the author is trying to stay true to the frame of Lilith's various more unseemly incarnations in myth, but still, he could have padded her out a bit more. She is a woman after all; a highly emotional creature.

I confess that for me, the most entertaining part of the book was the introduction; an email supposedly received by the author from a much-molested Iraqi girl who had apparently stumbled across the most profound archaeological and spiritual discovery ever found… That bit had me giggling out loud. It drew me right into the book. It was an intelligent choice to open the book with it.

All in all the Book of Lilith is up there in the ranks of self-published books. The quality of writing, the style and voice of the author made the book quite compelling and a good read. It gets a bit preachy in some areas, but it’s not slathered on too thickly. It did also run on a bit at the end too. A nice neat, elegant exit would have done well to finish up what is in all, a very professional package.

I give this book 4.5 medallions

Posted by HerOdyssey at 6:57 PM