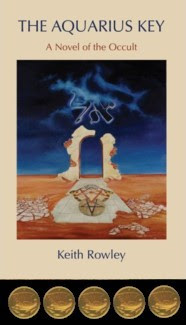 Sue and Bill Williams live normal contented lives: Sue is a handsome woman in love with her husband, and Bill, a successful, hard-driving businessman. In the blink of an eye, everything changes. They are thrown into a reality where they come face-to-face with true evil. People they’ve known and trusted for years suddenly become their greatest peril—and neither of them would have ever guessed that they would play an integral role in bringing evil into their world. Bill not only discovers that an occult group is responsible for this madness, but that his brother Peter is part of it all.

I never give the 5-medallion rating easily; however every blue moon you come across a book that just knocks your socks off for the quality of writing and the complexity and magnetism of the story. I’ve stumbled onto one right here. The Aquarius Key is in my opinion, the technical standard to which all self-published authors should aspire. The writing is clean and as sharp as a blade and the story tight and cohesive, with that incredible pull that makes you wish your day would go faster so you can go home and read it some more.

There are some scenes of a violent sexual nature in this book, as well as other themes that are appropriate for adult readers only. This book touches on the darker nature of the occult and esoteric practices that may not be palatable to certain people. I will openly admit that many parts of this book just screeched right over the top of my head; I claim no great knowledge of the esoteric practices, nor do I pretend to understand it all in great depth; however the well-researched glimpses Mr. Rowley paints of the ceremonies and teachings of Kabbalah and magic were vivid and enlightening. He showed with credibility what a fine line it can be between good and evil, using fiction, history, science and fact in a graceful dance of words.

Keith Rowley introduces the reader to the dark history of Aleister Crowley, to the Thelemic texts, and to the darker side of the practices. He follows the spiritual schooling of a young Peter throughout the book, giving his reader a cursory edification into the practices of magic. It was fascinating but the flow of information was a bit overwhelming at times, which is the only criticism I have of this book.

I give The Aquarius Key five medallions. It is an excellent read; and I recommend it to anyone who likes an intelligently presented novel and a thrilling, hair-raising story.

Posted by HerOdyssey at 9:46 AM