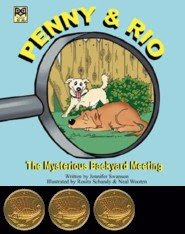 Penny & Rio: The Mysterious Backyard Meeting, is a very cute children's book. The illustrations are adorable and the story is both a mystery and a very sweet tale about two dogs, an Owl, a Squirrel, a Groundhog, and a Cat. Penny is a very rambunctious dog who loves adventure. Rio, is a lazy dog who would rather sleep the day away. Penny discovers that there are several animals having a meeting in her back yard at night and is determined to unravel the mystery of what they are up to.

Three of us have read through this book, the first to read it was my 10 year old son. His response was that he liked the pictures, but was confused by the underlined text and the use of italics. He also pointed out a typo that had him baffled for a bit. In the end he liked the story but didn't want to take it to school because it "Looked like a baby book" by which I am assuming he means the shape of the book which is 8x8 inches.

My youngest son is 7, at first he was very excited about the book (he is considered an advanced reader per his teacher). Once he started reading however, he was confused by the underlining and italics and started skipping pages. When I asked him if he liked the story he said there were too many words and not enough pictures, because the pictures didn't go with the words.

When I read the book aloud to him, I discovered what he meant, there is a lot of text per page for the little ones. A lot happens on each page, so in a sense he is right, the pictures can only show one of the many things that happen on the page. I thought the story was good, but suffered in the execution of the book. The book looks like a 5-7 year old book, but the writing is geared more for the 8-10 crew. Had the book either had more pictures and the text broken up more, I think my youngest son would have liked it. Or had the book been shaped more like a regular book my older son would have liked it more. I did find that the most successful way for us to enjoy this book is for me to read it aloud, this prevents the confusion with the underlined and italicized words.

As a parent I did find that there was a lot of negativity in this book, Penny is punished for trying to go outside, the animals break into the neighbors house (granted it was to stage a rescue), there are accusations of theft and lying, and mentioning mean people who send animals to the pound and how terrible it is. Though I see where the author was going with this, I think it's a bit much for the younger group to take all of those negative events in. Still this is a cute little book that I wouldn't mind my kids reading again.

Posted by HerOdyssey at 8:24 AM