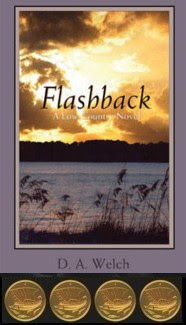 In D.A. Welch’s Flashback: A Low Country Novel, Navy SEAL Nate Dunlevy comes home to South Carolina a tormented man; suffering from vivid flashbacks of a traumatic event during the war. He meets Eve and falls in love, however Eve comes with a troubled background as well; namely an obsessive religious fanatic ex-boyfriend who seems hell-bent on objectifying and hurting her. Nate’s desire to protect his lady from this misguided, dangerous man leads him into a hornet’s nest; a religious extremist group that has hate-listed Nate, and the three other people who’ve become embroiled in the consequences of Eve’s bad judgment.

In truth, this is a romance novel. Instead of the existing attractive photo on the cover, it could have done just as well with the well-known image of the shirtless man embracing a swooning woman with a heaving bosom. It fits right into the formula of a romance novel; flawless beautiful people who come together (figuratively, literally and always simultaneously) with the pat set of challenges that keep them just slightly apart enough to keep the reader turning the page. The side-story of the militant, questionably motivated killer religious group was entertaining, it did help pad out the expected romantic dance between the four main characters, and provide a platform for Nate’s stealthy skills.

Nate is the Sensitive SEAL, the specimen of a perfect man, chiseled, beautiful, and tormented. All of the characters are torn from the pages of magazines, dressed in fashionable clothes, plopped into trendy homes and careers, conveniently blessed with the requisite issues to hinder them just that little bit. --this portion removed per author's preferences--

As for flashbacks; this book has little to do with them. In fact, as far as Nate’s trauma and personal torment go; there is little follow-up besides a couple of physical episodes and some therapy sessions that focus more on Nate’s sexual issues [edit] than dealing with the flashbacks themselves.

It’s not that this book isn’t enjoyable. Flashback: a Low Country Novel is an easy, rainy-weekend read. It is well written, decently edited, with some stunning visuals of the low country topping each new chapter. The problem is that it was never quite believable, and as a reader, I could never quite feel fully absorbed into the story. Being someone who doesn’t care for this genre of book, I feel like I would be wrong to give it the 3.5 medallions I’d like to give it. So I give the book 4 medallions for all those romance-book addicts out there.

Posted by HerOdyssey at 9:49 AM