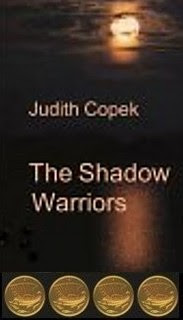 The Shadow Warriors, by Judith Copek, tells the story of Emma Lee Davis -- a vibrant character from the start -- as she works with an information security team to crack a series of computer agents for a secretive client. While the subject is slanted towards nerd-dom, Emma is first and foremost a woman, which is a refreshing change of pace from male-dominated thrillers.

Emma, nicknamed "Emmental" by her hacker buddies, is a busy woman. She must complete her job; balance two repressed romances while attempting to repair a marriage; protect herself and her friends from terrorists; decode a series of intricately interconnected computer agents; and all while (hopefully) wearing the right outfit to present herself correctly to her friends and peers. Don't be misled into thinking this is just another chick-lit thriller, however. Emmental's femininity is used to augment a fast-paced plot full of murder and intrigue, and her empathy strengthens the plot, rather than detracting from it. All of the characters are believable and richly crafted, and the plot is something you might find in an Ian Fleming novel: taking us to foreign cities and cultures, rich with language and cuisine that are reflected delightfully within the prose.

Unlike Tom Clancy's novel of the same name, Judith Copek's book is independently published: a point only worth mentioning because the production seems amateurish. Copek's The Shadow Warriors presents a potential reader with pixelated photos on the back of a poorly designed cover: a poor first impression. Yet it would be a pity to overlook Copek, as her story is robust, entertaining, and terrifyingly prophetic. As is often the case with self-published books, there are a few typographical errors tucked away inside this 476 page adventure--but only a few, and nothing that detracts from the enjoyability of the book.

I suspect that the author is not an expert on the rather sophisticated topics of computer hacking and information security, and yet the hacker lingo and technical terms are used correctly, both to further the plot and also to define the colorful cast of computer cryptics. Only small portions of this rather intricate tale seemed forced: the relationship between Emma and her distant husband was lacking, and I found myself not caring whether or not they reunited; also, as the story progressed, I found myself wishing for more detail of the events of the apocalyptic Info War, and less of the detail leading up to it. Overall, The Shadow Warriors, by Judith Copek, was well written, complex and entertaining.

Posted by HerOdyssey at 8:20 AM