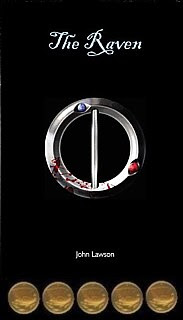 John Lawson’s book “Witch Ember” made an impression on my sister. Only two fantasy books have done so, and she reviewed them both (self-published books) here. I read both of the books my sister said were amazing, and I have to agree with my sister. They are indeed amazing. So, I cannot deny that “Witch Ember” is a work of excellence. Now I am reviewing the sequel to “Witch Ember”, John Lawson’s “The Raven”.

I can only start by saying that I am floored. In my mind, there is no reason why this author should not be published through a major publisher. His work is without a doubt on my part, beyond exceptional. The scope of his imagination surpasses most of the commercial Fantasy books I’ve read.

What makes this book stand out is the sheer magnitude of the world that the author has created; the attention to detail, the originality of the characters and the world, even with the strong influences from our own cultures, norms and religions. His skill at world-building was brushed on in “Witch Ember”; here, it is in your face. John Lawson also plays with language, and context and adds to the mood and the expressiveness of his characters using dialect. It’s brilliant, despite the need for a glossary (which the author thoughtfully marked with a post-it flag for me).

“The Raven” is a dark adult fantasy, which like its prequel, has situations and bleakness in it that are not suitable for everyone. This book’s stories are harsh and in some cases, graphic and gory. The visuals the writing produces sometimes make you wonder what the heck could possibly be going on inside the author’s head. But don’t be mistaken, this isn’t just a gore-filled blood-fest; there’s depth, substance and turmoil here; a violently tormented knight and a journey where you perceive growth and discovery, and perhaps even redemption.

Guiromélans is a holy warrior; a tainted paladin; a man whose faith has been put into question, and whose identity is so steeped in faith that his entire being is thrown into turmoil by his doubt and confusion. You will follow him as he tries to make himself right with God again, and as he travels and adventures through a world of creatures and images fresh and gloomy. The three-dimensional characters that accompany him, who pass through his stories, whose lives he affects are as rich and complex as the world they live in.

The book is as clean as a whistle with only occasional blips here and there; it is quite decently edited. It’s a thick book, and luckily, fairly self-contained, so you can pick it up without having read “Witch Ember” and not feel lost or overwhelmed.

Obviously, John Lawson has earned another five medallions from Odyssey Reviews for “The Raven”. I highly recommend this book to any serious Fantasy reader--it's a solid investment for your library. You will be refreshed by its scope and originality. You will also enjoy the collection of illustrations peppered throughout the pages.

Posted by HerOdyssey at 3:59 PM