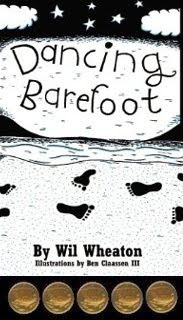 Since I have been bereft of queries to draw my interest, I decided to read Dancing Barefoot, a book written by Wil Wheaton; the young man who played Wesley in Star Trek the Next Generation. It was given to me by one of my prior-reviewed authors who’s become a good friend. She follows a lot of the geeky stuff on the web, because that’s what she does, and she brought me this small book when I complained about having nothing good to read.
I was dubious, to say the least. One, because it’s not the first time I’ve picked up a book by a celebrity. Many times I’ve been often disappointed by the product; most of which are usually ghost-written testaments to their amazingness, or a ‘woe-is-me, look what I’ve overcome to become the awesomeness I am today’ sort of diatribe. But what encouraged me to go ahead and read it was how thin the book was; I figured I’d have to suffer only a little.
I was astonished, to be honest. I was surprised by the honesty in the tone and the level to which Mr. Wheaton was willing to open up about his insecurities, his vulnerability and his humanity—all in a very short book. What a great guy. That’s what I came away thinking after devouring the 115 pages of font size 14 text in two hours. I have decided to post a quick review of the book on Odyssey because Wil is an independent author who published his own work, and so a review of his work is not out of place here. FYI: Wil apparently has a few more books on offer, which I now plan to purchase and enjoy.
Dancing Barefoot is a collection of five stories from Wil’s life. The stories include memories of his young life, starting with memories of a beloved aunt; which is an incredibly raw and touching piece, written in such a superb, heartfelt voice; and ending in a lengthy missive about a Star Trek convention, where he makes you laugh and then mists you up in the span of a few paragraphs.
Wil has a natural writing style that is incredibly readable and filled with warmth and vulnerability. There’s no pretence, no airs, it’s him in his most human state, including even his cutting sarcasm and unique perspective growing up on the set of a Sci-Fi show. His descriptions are excellent, and his wit and humour is wonderful. I’m now a fan. I recommend this book to anyone; trekkers or non-trekker alike. It’s a realistic glimpse into how difficult it can be to grow up in the public eye, and how hard the approval and disapproval of the famous and the fan alike can be life-changing.
Read this book. It’s great. Five medallions.