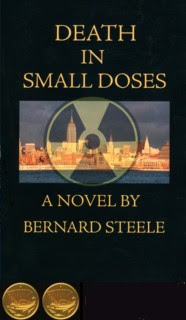 Steele is a first time author who has developed a very entertaining and complicated plot involving terrorist, the DEA, Cocaine and a nasty terrorist plot. Though the concept of drugs being smuggled next to bomb making materials and becoming irradiated has been done before in several other novels (see "Atomic Lobster" by Tim Dorsey for a comedic example) it is only a small trigger piece to a much more involving plot.

The Good: The plot is engaging and well thought out. The terrorists are once again planning to harm the residents of NY and we have all of the government agencies working to stop them. There are a few fire fights for those of you who enjoy a bit of action in your books and we also have a kidnapping, a poisoning or two, and a handful of drug dealers.

The Bad: Steele has difficulty in truly fleshing out his characters and making them believable personas. We have a lot of "he said" and "she said" but no real description of physical characteristics, character traits, tics, or even differentiating speech. The dialogue is extremely forced and often reads similar to a technical manual rather than individuals having a conversation. Often one individual will make a speech stating events then we cut to another chapter. There is very little true human interest, though it is obvious that the attempt to
interject some romance was made, because the reader is not able to "see" the characters through the writing it comes across as effective as simply writing "they went on a date". Still there is a lot of promise in this writer once he has delved more deeply into the human state of affairs rather than the technical side. A different issue that many readers will have is that the book comes across as preachy; several characters have paragraph or longer dialogue simply to put the author's opinions on drugs, evolution, racism, education, Muslims, or terrorism
on the table. No one argues with them and the dialogue reads as more of a thesis argument rather than people truly having a philosophical discussion or debate.

The Ugly: I am assuming that this is not the fault of the writer, but the editing of this book is non-existent. There are misspellings, bad grammar, words in the incorrect order, apostrophes used incorrectly, strange usage of italics, chapter breaks where there shouldn't be, and chapter breaks missing from where they should be. In the beginning of the book, there is a chapter break almost every two pages, towards the end of the book the focus shifts from the terrorists to the DEA agents, and back to the terrorists with no break or notification to the reader that we are shifting to a completely different location and group of people. It is not until the names change that the reader is able to catch on that the focus has shifted again.

It is my suggestion (and a humble one at that) that the author would be benefited by a very strong editor who is willing to work with him to clean up the printing issues and to assist him with cutting some of the unnecessary chapters in order to make room for fleshing out the main characters more. I cannot in good faith, with the grammar and printing issues in this edition, suggest it for purchase as is. I truly hope to see this book re-worked and edited because it is a strong story at it's
core.

Posted by HerOdyssey at 4:26 PM