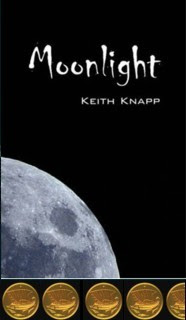 Though Keith Knapp's debut novel Moonlight is almost 500 pages long, don't let that deter you from reading it. There is a lot of space and the font is large. If "Moonlight" had been printed by most of the mass market crew this book would probably be in the 330-350 page range. Beyond that...the almost 500 pages of this book are very good and the author managesto entertain from beginning to end.

Short Plot Summary: The power goes out, and along with it everything else stops working from cars to watches to anything you depend on formodern civilization. As if that isn't enough, suddenly people aren't acting right... in fact they have become downright homicidal, and for some reason when you knock them down, they just keep getting back up,alive or not. We follow a band of survivors as they try to figure out what is going on and how they are going to live through the madness.

Meanwhile we have the dark man in the trench coat who isn't thrilled about our crew of scrappy survivors. With echoes of "The Stand" and "The Rising" this novel takes off quickly.

"Moonlight" is a very easy read, it flows well and although at first it appears that this might end up being something we've all read before, it quickly turns down a different path. The author does a good job of keeping the tension up and not spoon feeding the reader all of the truth as to what is going on too quickly. I also really appreciated that no-one in the book immediately had the answer.

There were guesses all over the ball park, which is far more realistic than many other horror novels where someone always seems to know exactly what the problem is right from the get go. Knapp also does a wonderful job with his characters. Though I won't say they were all multi-dimensional, the ones we needed to care about, he was able to evoke enough emotion for.

The reader will be concerned for many of them, and not all of them will make it. Though for the most part it is pretty clear who is going to live and die, there were a few stray deaths in there that I wasn't expecting (which is always good). As far as the ending... It could haveu sed a little more umph and fireworks but other than that, I closed the book and felt satisfied with what I had read. My only real issue with the book was the title, which really didn't have anything at all to do with the story. In fact many readers may be confused at the lack of werewolves in the story.

Oh and a warning for those of you who are not familiar with the horror genre, there is a good bit of gore in this book and there IS profanity, though I didn't personally find it excessive or out of place. I would suggest this book to the standard horror fans (King, Koontz, Matheson), I don't know that the extreme horror crew will find enough of the truly disgusting moments to keep them satisfied. Also this book is PG rated when it comes to the nudity and sex aspect (which I was completely happy with) but if that's what you are looking for, head for some Laymon or Lee rather than this novel. I really enjoyed this read and will pick up others by this author when they come out. Highly recommended.

Posted by HerOdyssey at 8:58 AM